Places of Religious in Kashmir

Religion has been a powerful force that has caused people to travel to religious centers in many parts of the world. A few examples of such travels are: Travelling to the ancient cities of Pakistan and Christendom, Mecca, Madina, and Bangkok. Pilgrimages by the Persian Shiites to their sacred place of assassination at Karbala in Iraq, Christians to Jerusalem, and Sunnis to Madina. Catholics are attracted to the Vatican City in Rome. India has an age-old tradition of religious pilgrimages within her territories and across with her neighbors.

The aesthetics, peaceful isolated lands, and unpolluted environs of Kashmir have been providing an ideal atmosphere for the men of God for ages. With the city of temples, Jammu as its southern boarding province and the land of Buddhist Monasteries, ‘Ladakh’ on the north, the Valley of Kashmir is identified with the name ‘Peer Vair’ or ‘Resh Vair’. It is a holy land, one comes across a network of ziarats, mosques, and temples which are thronged by believers from within Kashmir and outside. Kashmir has the credit of receiving large chunks of domestic and international tourists adding a new chapter to the tourism of Kashmir, viz, Religious or Pilgrim Tourism. It not only brings good revenue to the state exchequer and economic benefits to the people but also helps in intellectual enrichment and cultural well-being. According to the tourist importance, the following places are recognized for religious tourism. 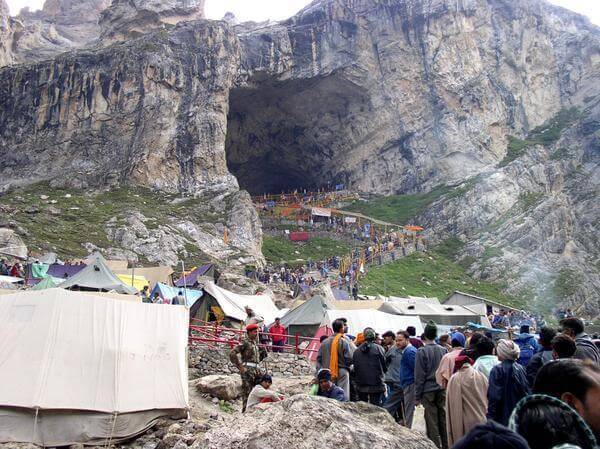 Kashmir is a land of pilgrimages. Set at an altitude of 3962 meters at a distance of 46.7 km. from Pahalgam, the Amarnath cave lies far away up the Lidder Valley, and the Ganga-Bal Lake, which rests under the snow-capped Haramukh. Amarnath cave attracts pilgrims not only from the Valley and Indian but from all parts of the world. After a preliminary visit to Khir Bhawani to Tula Mula, the army of pilgrims gathers in Srinagar and proceeds by appointed marches to Amarnath. The pilgrims must make obeisance on the full moon of Sawan (July-August) yearly. It is imperative for the pilgrims to bathe at appointed places and passes through sacred Mach Bawan-Ranking second in sanctity after Tula Mula. After the bath in Sheshnag Lake, two marches are made before the sacred cave is reached. The pilgrims call on Shiva to appear and if the God is propitious pigeons flutter out from the cave. The shrine of Amarnath is believed to be the abode of Lord Shiva. A stalactite, formed by water dripping through the limestone roof of the cave, has formed in the shaped of a natural lingam. The lingam waxes and wanes with the moon. The state government makes elaborate arrangements for the Yatra. From Chandanwari to Sheshnag (3574 meters) the 11.3 km long Pony track takes one to another attraction, a freshwater lake. One can camp at Zojipal or a little ahead at Wawjan where there is a Rest House and pilgrim shelters. From Sheshnag to Panchtarni it is a 13 km pony track. A Rest House and pilgrim shelters provide accommodation here. From Panchtarni to Amarnath cave there is a track of 6.4 km at an altitude of 3849 meters.

‘Tsrar’ or Chrarsharif, 30 km from Srinagar, is the best-known shrine in the Jammu and Kashmir state. The shrine has been built on the burial of the great saint Shaikh Nur-ud-Din, popularly known as Alam Dar-i-Kashmir.

Thousands of people from Kashmir, outside Kashmir, and abroad visit the shrine of Shaikh Nur-ud-Din. To the great shock of Kashmiris, the shrine complex was gutted in the fire as a consequence of the gun battle between militants and security forces in May 1995 on the following day of Id-ul-Azha. It is said to have been built, in its present form during the reign of Akbar. The adjoining mosque to the one-time tomb is stated to have been constructed in the time of Atta Mohammad Khan Burkzoi, the Afghan governor in 1711 A.D. who had unusual esteem for the saint. After the damage to the shrine in May 1995, it has been rebuilt in an elegant manner.

Hazratbal also believed to be the ‘Kaaba of the Poor’ is situated majestically on the site of one of the early Mughal Gardens known as Sadiq-Abad, built-in Shah Jahan’s reign, on the western shore of the beautiful Dal Lake, opposite Nishat Bagh at a distance of 7 km, commanding a grand view of the lake and the mountains unfolding as a backdrop behind it. The special sanctity of Hazaratbal is due to the presence of the Holy Relic of the Prophet Mohammad (PHUH) which was brought to Kashmir from Madina by Saiyad Abdullah in 1111 A.H. and exhibited by Khwaja Nur-ud-Din Ishbar in Srinagar. The function drew such a big crowd that many persons were crushed to death, and the ruler of the country prudently ordered that the hair should be kept in some open place. The new grand white marble structure of the shrine and the mosque at Hazratbal was built under the patronage of Shaikh Mohammad Abdullah, the then Chief Minister of Jammu & Kashmir state. Thousand of believers throng the shrine on the Id-Milad-un-Nabi, the birthday of the Prophet, every Friday and festival. 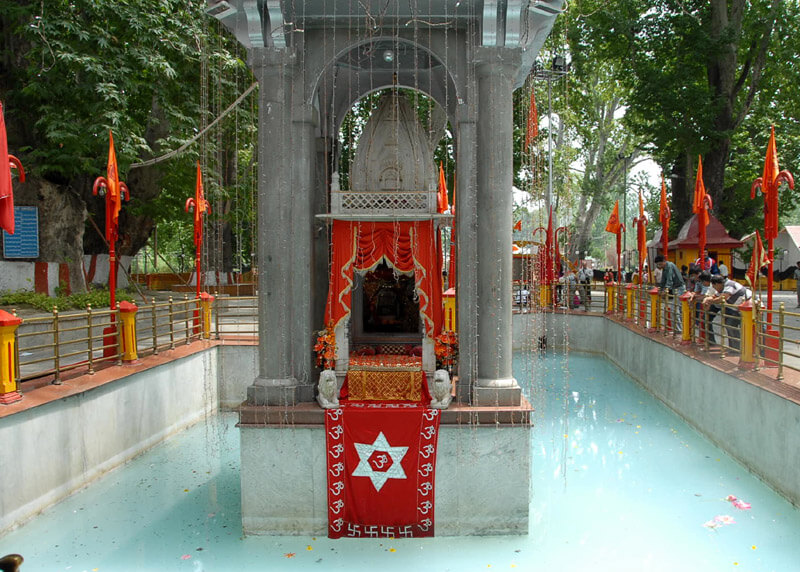 The Kashmiri Pandits are chiefly followers of Shiva, the Lord of the mountain and the god of the hill people. The temple of Ragnia Devi, Khir Bhawani at Tula Mulla is the most sacred place of Kashmiri Pandits. The water of the spring of Khir Bhawani at the mouth of the Sindh Valley is believed to change color. The peculiarity of this milk goddess temple is the Hindus must abstain from meat on the days when they visit her, and their offerings are sugar, milk, rice, and flowers, and bath the goddess with milk. A festival is held annually at the temple.

The Ziarat or tomb of the noted Muslim saint Baba Payam-u-Din is 5 kms from the middle gap on the east of the Gulmarg valley. He was buried here in 1480. Before renouncing worldly ways he was a courtier of the Kashmir King Zain-ul-Abidin. The path leads down through thick forests. Baba Payam-u-Din who was Khalifa of Shaikh Nur-ud-Din’s Khalifa Zain-ud-Din lived here during Mughal rule. The shrine receives pilgrims irrespective of caste, creed, and religion who make offerings here. International tourists en route to Gulmarg visit this place.

The well-known shrine of Dastagir Sahib is located in great reverence in the heart of the city at Khanyar, Srinagar. It holds the sacred hair of the noted scholar saint of Shaikh Saiyad Abdul Qadir Geelani of Khorasan Iraq buried in Baghdad. His ‘Ziarat’ at Srinagar is a center of pilgrimages and prayers are offered here. The hair of the great Saiyad casts no Shadow and hangs in the air. The followers of Dastagir Sahib are called Qadiris. 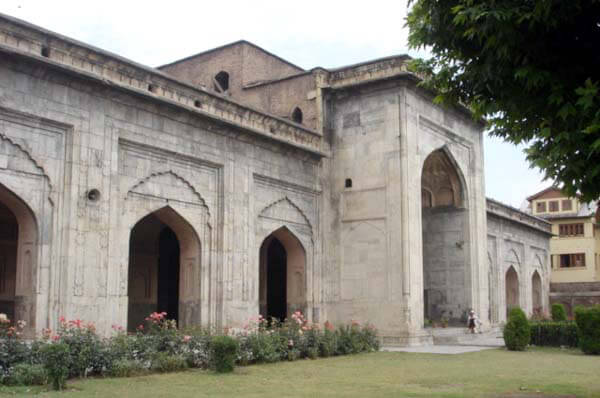 PreviousThe Best Gardens of Kashmir – Famous Gardens in KashmirNextKishtwar, The Land of Saffron and Sapphire