Although the great religious festivals of Ladakh almost all fall in the winter, practically all the villages have harvest thanksgiving festivals and archery events during the summer. There are also private parties in which dance plays an important role. In these slow, sustained dances the dancers appear to be between dream and trance. 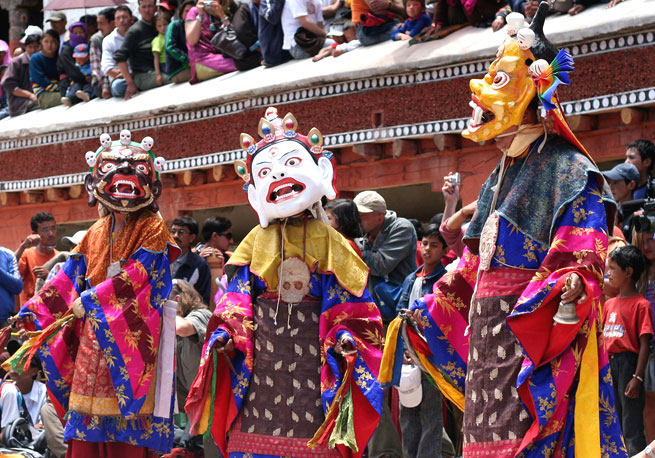 Many of the dances, which have a musical accompaniment of drums and flutes, show interesting elements from the daily life of farmers. Hand movements, for example, are unmistakably taken from the actions involved in sowing seeds. In general men and women dance totally separately. If they are together on the same ‘dance floor’ they will still do their own, unrelated, dances. We experienced a special feature during a celebration at Bodh Kharbu – a dance master selected from the crowd some women and young girls to dance. After initial reluctance, they seemed to quite enjoy it.

Ladakhi archery contents, which are followed by more dancing, are only a pale reflection of similar festivals in other Himalayan states. Whereas in Bhutan specially designed and fashioned bows would be used for such contests, in Ladakh the bows are much cruder. Nevertheless, these contests have their own charm and they do give you the opportunity to see the making of change, butter-tea, and tsampa. No matter what else happens at a festival these three ingredients must be included. Festival musicians are generally paid for local produce. After a god meal they receive, with their cup of butter-tea, a cup of butter-tea, a cup of tsampa meal, sometimes also sugar and a piece of butter. The whole lot is wrapped up in a piece of cloth and knotted for transport.

Anyone wishing to tape-record festival; music should keep their microphone concealed. Otherwise, all that will result in a wild medley of noises since the Ladakhis are fascinated by these strange technological instruments. They will point it out to the audience and comment loudly! A cassette recorder with an inbuilt microphone can be kept out of sight, even inside a carrying bag.