The Best Gardens of Kashmir – Famous Gardens in Kashmir

The Valley of Kashmir is known for its mesmerizing beauty not only across the nation but also across the globe. The Snow-capped peaks gently brushed by the sunbeams, the dancing rivulets, the Pine, chinar, and deodar lined lanes, the delectable apple orchards, and the pellucid lakes all give Kashmir its heavenly charm and how can one forget the beautiful Gardens of Kashmir, presenting a true riot of colors! Read on to learn in detail about the Gardens of Kashmir. 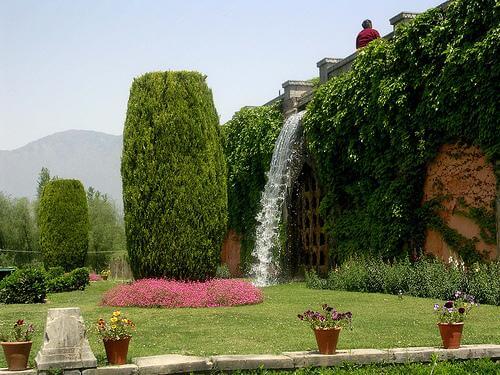 Kashmir is a state of beauty. Rightly said it is Heaven on Earth. The vast mountains and the wonderful scenic beauty make the place unforgettable. Springtime in Kashmir brings out the colors of Kashmir with the gardens that are part of Kashmir’s majestic beauty. Situated in the crown of the country it appears as the queen decorated with vibrancy and colors.

The gardens are Kashmir was the contribution of Mughal rulers in India. Mughals were well known for their ample interest in building gardens. They were the exotic kings with luxury in their blood. Their contribution to the gardens gave the place a gorgeous look. Their sense of style resembles the Persian style and their tastes in garden decoration depict their culture and style. The architecture of the Persians is popularly known as the Charbagh stricture. The specialties of the structures are the rectangular-shaped layouts within surrounding walls. The enclosed wall comprises fountains, pools, and canals which are the typical style of Mughal Gardens. The kings of the Mughal Dynasty used to spend their leisure time in these gardens. The designs of the gardens in Kashmir have nomadic influences from Turkish and Mongolian ancestors. Throughout the decades with the change in culture and dynasties the designs of architecture evolved. The water bodies were kept to reflect the beauty of the flowers and the entire garden on the water. There are several trees well maintained to suit the royal image of the garden. The flowers and fruit in the garden spread a sweet smell over the entire garden. With the sound of birds and the sweet smell, the gardens gave the perfect environment of romance for the kings to spend time with their queens.

Shalimar Garden is connected with the Dal Lake of Srinagar. A channel of water from the garden meets Dal Lake in its North East area. There are other names for this famous garden by which is known. These are: – Faiz Baksh, Farah Baksh, Shalamar Bagh and Shalamar Garden. The park initially was made for horticulture by Emperor Shahjahan. The Mughal Emperor built this garden for his wife Nur Jahan. After the reign of the dynasty, it has now become a park for public visits. 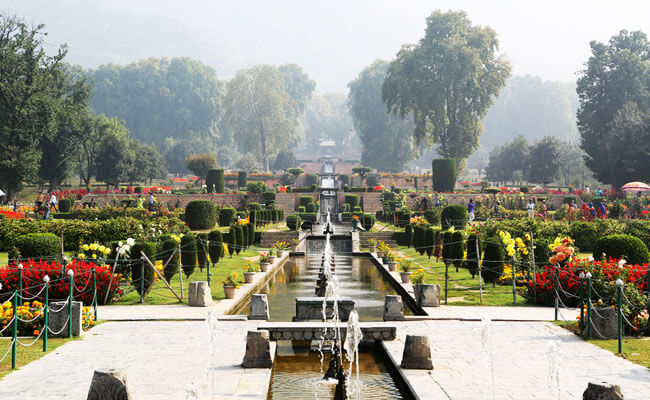 The history of this garden begins from the time of Pravarsena II during the 2nd century. The king bought a cottage in Dal Lake and named it Shalimar. Later the cottage was ruined and the village remained. In the same place, Jahangir built this garden for his wifeNur Jahan. During summers it was \the place where the couple spend their time.

The central part of the garden has a stream from which four sides have come out. The entire garden is made on a square plan. Later modifications were done to suit the region and to get the water and a slope was made. The channel of water is known as the Shah Nahar. It has a rectangular shape with three terraces in the garden. The garden has chinar trees and fountains and the source of water is the Shah Nahar. The entire garden is 12.4 hectares.

The three terraces have different significance during the Mughal rule. The first terrace was for public viewing and has a fountain with a small black marble throne. The place was known as Diwan-e-Aam. The second terrace was known as Diwan-fa-Khas which was for the private audience. The special guests would come to this place. There are carved stone bases with royal bathrooms. The third is broader than the other two and has two more short steps. The garden here is known as the Zenana Garden and is the Diwan-i-Khas. It is a restricted place for the royal family. The entire Shalimar Bagh has 410 fountains. There are also waterfalls that are popularly known as Chini Khanas. The falls were surrounded by lamps that lit the garden giving it a fairy tale look at night. Shalimar Garden has been one of the most famous shooting locations for old Bollywood films. A few scenes of the movie Padosan were shot in Shalimar Garden.

Srinagar has Asia’s largest Tulip Garden in Srinagar. The Garden is also known as Indira Gandhi Memorial Tulip Garden. It lies at the Zabarwan Mountain Range. The Nishat Bagh and the Chasmesahi surround the tulip Garden of Kashmir. The origin of the beautiful flower with its long stem and beautiful petals is from Persia. This beautiful flower has made its home in the garden of Kashmir enhancing the beauty of the Paradise in India. The garden has around 70 varieties of colored tulips. The garden looks like a painting of the Almighty in its blooming season. The bright colors seem to be spread on the canvas of nature. The vibrant colors and their exotic beauty will mesmerize the eyes. Pink, red, orange, purple, yellow, and white tulips light up the garden with their colors. Nature shows off her beauty through the flowers. The season of tulips is from March to May. During this time of the year, the people celebrate the Tulip Festival. The beauty of the garden overlaps the beautiful mountains. The Garden attracts a number of tourists every year. 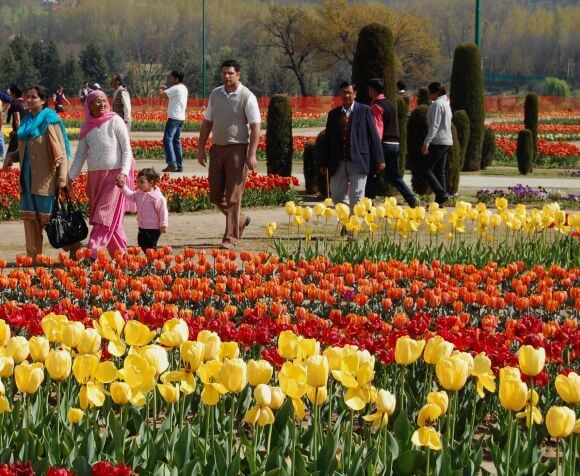 This garden was made by Asif Khan in the year 1633. Asif Khan was the brother of Queen Nur Jehan. The garden is located around the Zabarwan Hills. In the middle of the garden is a long channel of water and the garden has terraces made. One can travel in the Shikara to visit the Nehru Park on the other side.

This garden was made by Shah Jahan in the year 1932. The garden is famous for its mineral water spring which is very good for digestion. This is a terraced garden with fountains. There are also trees and plants of a wide variety. The famous tree is the Chinar tree.

This garden was made by Dara Sikho, the son of Shah Jahan for his Sufi teacher Mulla Shah. The garden consisted of springs which at present have dried. The palace is undertaken by the government of Jammu and Kashmir. The garden is surrounded by a hill and has a mesmerizing beauty as the lights of the lamps dazzle the garden at night. The place earlier had a Buddhist monastery. The garden has many trees bearing different kinds of fruits and flowers.

There is a village named Harwan. It consists of the remains of Buddhism and depicts the culture of the era. There are decorated pavements. There are tiles that have decorations of the dresses worn. The dresses have an Asian influence that is found all over the place. The Harwan garden is located in Srinagar. It has become a very famous picnic spot. The garden has a long canal. The water comes from the pond that is outside the garden. There are beautiful flowering plants that decorate the garden. Chinar trees which are a specialty of Kashmir are found here. Like all the other gardens there is a lack of artificiality in this garden. It does not have terraces and fountains all around the garden. The garden is kept completely natural and the place is full of natural beauty. The blessing of Mother Nature thus remains the main attraction of the garden. The lawns are full of greenery which makes it an ideal picnic spot. To enjoy the beauty of nature while having long walks is the pleasure found in the garden. From this place, one can travel to other tourist spots. One can start their trekking tour to MahadevMountain Trek from this garden. The Dachi Gam Wildlife Sanctuary is also in the vicinity.

This garden is located in a village named Bijbehara on the banks of River Jhelum. The garden was named after Dara Shikoh, the son of Shah Jahan. Chinar trees are the main attraction of the garden. 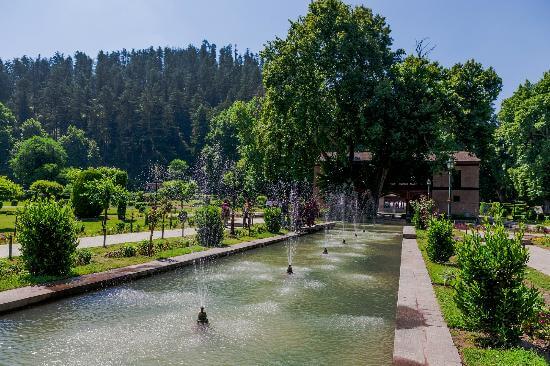 This is a small garden and the name signifies the place of princes. It is situated in the town of Achabal in the Anantnag District. The garden was built by Jahangir’s wife Nur Jahan. The garden has a waterfall that enters a pool inside the garden.

Kashmir remains a place of beauty. The travelers open their eyes to see beauty. Coming at any time of the year the visitors can never get disappointed. The colors of flowers attract the sight of everyone. Roses are also famous in Kashmir. The variety of colors in flowers is best found in Kashmir. Rare species of flower grow in the state of Jammu and Kashmir. Kashmir has its own culture and lifestyle that attracts so many people. Travel lovers can never say for repetitive trips to Kashmir. If one loves to trek there are ample opportunities provided by the Great Himalayas. It is an ideal destination for honeymoon couples who wish to spend time with their partner walking hand in hand in the beautiful gardens made by the emperors of the Mughal dynasty. The gardens depict their love for beauty and their wish to preserve nature for the coming generations. Kashmir Gardens will thus forever be thankful to the great Mughal Dynasty.

PreviousBest Season for Traveling in Leh & LadakhNextPlaces of Religious in Kashmir