India has been gifted by many mesmerizing gifts of nature and one place where you get to see Nature in the most pristine and beauteous form is the Nubra Valley of Jammu and Kashmir. It is here that one gets a glimpse of the double-humped camels in India and also it’s a vale that comes ablaze with the fresh blooms of apricot flowers leaving one really wonderstruck at Nature’s beauty! 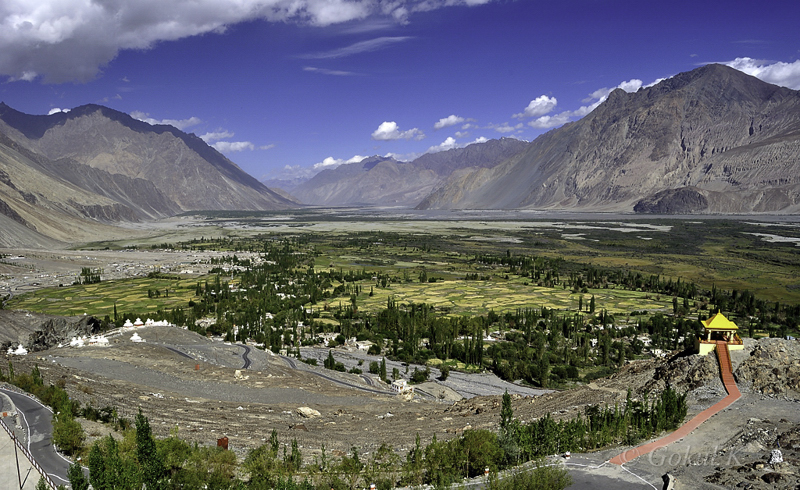 Located at an altitude of 10,000 feet from the sea level in the northeast of the district of Ladakh, this tri-armed vale has been categorically defined as a cold dessert comprising of snow-capped mountain peaks, sparse vegetation, and river beds. Ideally speaking it gives us a peek at the different facets of nature. The most common way to reach here is crossing the world’s highest motorable road-Khardung La pass from Leh town in about 5-6 hours. The valley is also surrounded by the Siachen glacier in the north; Sasser Pass and the famous Karakoram Pass in the northwest which connects Nubra with Xinjiang. The Shyok River crisscrosses the valley after meeting the Nubra River making the land fertile.

The history of Nubra Valley dates back to the 14thcentury and is rooted in a Tibetan origin. The valley was ruled by different kings during the different phases of history namely King Grags-pa-‘bum-lde (1400–1440), King Blogros-chog-idan (1440–1470, Bkra-shis-rnam-rgyal in 1500, who brought Nubra under the Ladakh King’s rule. It was under Bkra-shis-rnam-rgyal leadership that Nubra valley achieved the progression of the Shia Muslims.

The local inhabitants are mostly Buddhists of a Tibetan origin and follow the Nubra dialect. Certain sections of the Nubra Inhabitants are Balti and hail from the Shia Muslim sect. Farming and sheep rearing are the chief occupations in the region.

When it comes to sampling the local cuisine of the place, you could countless mouthwatering get vegetarian and non-vegetarian options. Bread made out of wheat and barley is a common part of most of the dishes in the region. Nubra Valley is also quite well known for its fruits such as almonds, apricots, walnuts, and blood apples on which to you could feast. Also, you have quite a few options to choose from among a slew of local street food vendors. 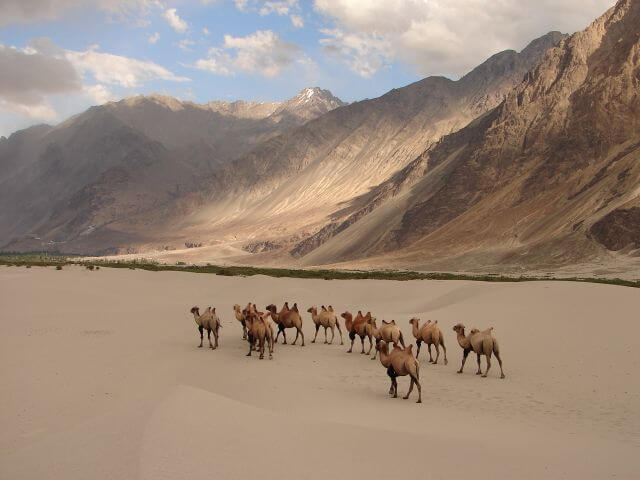 Though Ladakh is commonly called the land of monasteries, Nubra also has some famous monasteries like the Diskit Gompa and Ensa Monastery which houses about 100 monks. Among the popular Nubra festivals, the “Festival of the Scapegoat” is the most outstanding one. It is celebrated in February and is a popular prayer festival pulling record crowds.

The weather conditions of Nubra Valley are pleasantly cold all year round. Winters are chilly and dry and summers are soothing and cool. During summers the minimum temperature could be around 4-degree centigrade and the maximum could be around 30 degrees centigrade. With the nightfall temperatures too fall quite rapidly. With the onset of the autumn, the wind turns crisp and the winters set in with the arrival of December and Last up to February.

The best time to visit the valley is between the months May-August. This is the Tourist season in the valley when there’s no dearth of food and accommodation in the Nubra Valley. All Guest Houses, Home Stay facilities, and Small lodges open up for tourists and are ready to welcome them with the full support of staff and other necessary amenities. Many of these Guest Houses offer tourists camping facilities as well. Tourists are served Chinese, Indian, European, and Continental meals at these guest houses.

Places of chief tourist attraction in Nubra Valley include:

So what are you waiting for? Quickly plan your next trip to Nubra Valley.