Music And Dance of Kashmir

The history and tradition of music and dance in Kashmir valley is about a thousand year old and enhance the charm of the Kashmir valley. These are some main forms of the classical music and folk song of Kashmir.

Kashmiri Sufiyana Music adds to the glory and grandeur of the region. Sufi Music was Introduced in the 15th century in the Kashmir valley from Iran, with the passage of time, a number of Indian ragas were added to this music form. Accompanied with traditional folk musical instruments of Size-Kashmir, Tabla, Kashmiri Sitar, and Kashmiri Santoor.

It is pronounced as ‘Row’ but ‘Ruf’ in villages. This dance is performed as a welcoming dance for the spring season. The dance is clearly inspired by a bee and it is the lovemaking of the bee that is portrayed in the dance. Rouf is the most popular traditional dance of Kashmir performed on every festive occasion, especially on Id and Ramzan days. The dance is performed by a group of women facing each other. The simple footwork of Rouf is both a visual as well as an artistic treat. 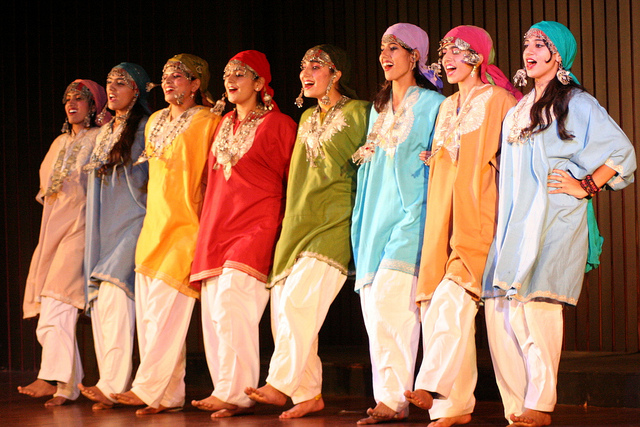 It is a part of the classical Sufiana Music, very popular in Kashmir people Hafiz Nagma makes use of Santoor-a hundred stringed instrument played with sticks. In Hafiz Nagma music there is a female dancer accompanied by a number of males with instruments. The dancer who performs a dance in this song is called Hafiza. Hafiza dancer moves her feet to the rhythm of the music.

This music was performed with the help of only Garaha, Sarangi, and Rabab instruments. Chakri has included the harmonium also in its presentation. It is one of the most popular forms of traditional music in Kashmir. Chakri truly upholds the heritage of culture and arts in the place.

This classical song is based on the love story of princess Habba Khatoon and Yousuf King. Habba Khatoon was a princess of Kashmir. This song reflects her feelings at the time when she was separated from the Yousuf King. Surma Surma is a song in Dogri that reflects the agony of a newly-married girl whose husband is away in the Army.

There are certain songs that are independent of instruments. “Bakhan” is such a best example. “Bakhan” is in verse. This folk song is a widely prevalent form of mass entertainment in our region. The haunting Melody of Pahari songs adds to the beauty and joy of daily life.

A dance song of the Dogra Pahari region of Jammu is being performed on the occasion of feasts, festivals, and marriages by the rural folk parties of this region. Male and female both participate in this dance song in their traditional costumes.

The classical music of Jammu and Kashmir, and the melodious Kashmiri Santoor compositions enchant and enthrall the audience with their captivating songs.

The Bakerwal and Gujjar tribal groups are known to have founded the lyrical tradition of Benthe. A group of people that commonly ranges from five to seven sing the Benthe song in a chorus.

Kashmir is also famous for its traditional dances. Kashmiri people celebrate their festivities with a number of Kashmiri folk dances. It is an important part of the Kashmiri culture and life. Given below is a list of some of the famous Kashmir dances.

Bhand Jashan is another one of the Kashmiri folk dances. It is performed by a group of 10 to 15 artists in their traditional style, along with some light music. 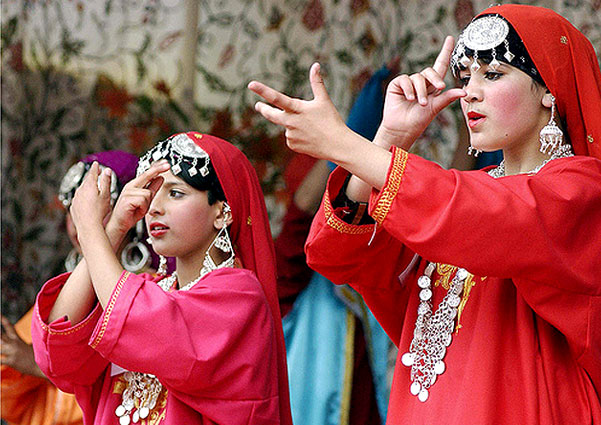 Hafiza Dance is a type of Kashmir dance, performed at wedding ceremonies. The prominent instrument used in Hafiz Nagma is called Santoor-a hundred stringed instrument played with sticks. The danseuse in this tradition is known as ‘Hafiza’.

Bhand Pather is a traditional folk theatre of Kashmir, usually performed for social and cultural functions. A powerful combination of play and dance, it portrays social traditions and evils, bringing out the satire in them.

Bachha Nagma, also known as ‘Bachha Gyavaun’ means ‘adolescent melodious voice. Young boys of Kashmir perform the Bacha Nagma dance, particularly during the harvest season or marriage ceremonies. One of the young boys dresses up as a female dancer, performing the Hafiza style of dance. The dance is performed only by boys or by men dressed as boys.

A less popular dance in Kashmir is Wuegi-Nachun. It is performed after the marriage ceremony when the bride has left for her new home. In this dance, Kashmiri pandit women dance around the bridal rangoli.

Performed mostly during the time of the Lori festival, this is a highly professional dance. A model peacock that is made of bamboo and colored paper is carried by every group and every member has a stick in his hand. During the dance, the performers hit the stick in the hand of another person in different postures that are not as simple as it looks. one must surely witness it when he is in Jammu and Kashmir.

Ladishah is very much famous and holds an important position in Kashmiri music tradition. The songs are sung resonating the present social and political conditions and are utterly humorous. The singers move from village to village performing generally during the harvesting period.