The Rizong monastery is 32 km from Khalsi. One travels 26 km further on towards Leh to the settlement of Ulay Tokpo where there are four houses and camp set up the Sita World Travels. Two hundred metres before this spot a route branches of into a northern side valley of the Indus. On foot the route crosses the river after 10 minutes. On the right, after 10 mintutes. On the right side, after a further 50 minutes, you reach Julichen, a nunnery in an apricot grove. By car you can travel from the highway to within two km of here before being halted by a bridgeless crossing – a bridge is due is due to be completed very soon. 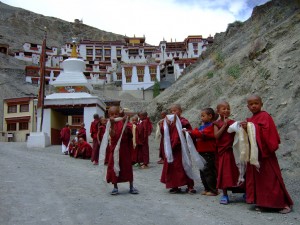 The nunnery belong to the Rizong Gompa and inside the courtyard you will find nuns busy spinning wool. At the fork in the road beyond julichen, marked by a blue flagpole and several colored manistones, turn to the left. On both sides of the road you will see painted inscriptions on the rock face. A further 30 minutes climb in a barren side valley brings you to the first Rizong chorten. A sign in English instructs you to ‘Refrain from smoking, drinking and eating here’. The small valley then opens into a depression on whose southern slope stands the monastery.

Founded in 1829 the monastery is at 3450 meters and presently has 30 monks. Its head lama belongs to the Shas Rimpoche in Dharamsala and the Chuldchim Nima in Manali. After the Thekchen workshop room the Dukhang is the most important room in the monastery. On another level one can see the stone drum with which the Rizong monks beat out their prayers. The stone drum is made of a hollowed out tree stump which has been covered with a stone slab. It is hit with a small stone hammer. 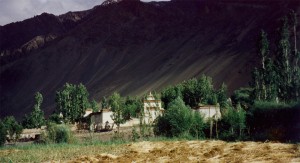 Women are not allowed to stay overnight at the Rizong Gompa. They must take quarters in the Julichen nunnery.

A road leads off the highway to a bridge over the Indus at a point 33 km beyond Khalsi and two km befor Saspul. The old bridge, which can only be crossed in a small jeep, is to be replaced by a new bridge which buses will be able to use. Travellers will then be able to travel directly to Alchi along the new graded road. In the village of Alchi there are many chortens, some of which possess gate like openings and others have the bases of small towers at their four corners. Alchi is unusual in that it is on lowland, not perched on a hill top like other Ladakhi gompas, built in the 11th century it is noted for its massive statues of Buddha and its lavish wood carvings and art work – almost baroque in style.