The geological studies reveal that the cave of Vaishnodevi is approximately one million years in age. Although the Rig Veda makes mention of the Trikuta, it does not refer to the worship of the ‘Mother Goddess’. ‘Shakti worship was initiated in the ‘Puranic’ period only. 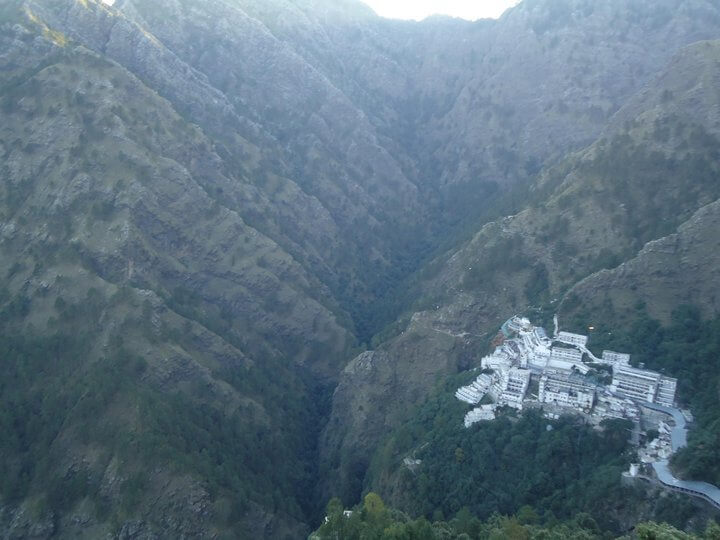 The Mahabharata is the first place where “Mother Goddess’ was mentioned by Arjun on the Kurukshetra battlefield. He supposedly invoked ‘Her’ blessings and referred to ‘Her’ as ‘Jambookatak Chityaishu Nityam Sannihitalaye’ which translates as ‘you who always dwells in the temple on the slope of the mountains in Jamboo’. The Pandavas are believed to have built the Bhawan and Kol Kandoli temples to show their gratitude to the deity. The five ‘stone structures’ in these places supposedly represent the ‘five Pandavs’.

The tenth Sikh Guru, Guru Gobind Singh, has made the oldest reference as far as history is concerned as he accounts for his visit to this Holy Cave through Purmandal. The ancient ‘foot track’ to Vaishno Devi passed via this pilgrimage center which is well-known to all the pilgrims.

Some of the traditions consider this particular Shrine as the holiest among all the others as they believe that ‘Mata Sati’s skull fell here. There are still others that believe that it was her ‘right arm’ that fell at this place. Gandarbal, a place in Kashmir, has been recorded to have been the place where the ‘right arm’ exactly fell. The interior of the Holy Cave contains a ‘stone hand’ remnants which are called the ‘Varad Hast’ (meaning the hand granting blessing and boons).

The Story Behind the Origin:

The story goes such that the ‘Devisor ‘Mother Goddesses’ used all their powers together to create a girl, young and beautiful. The purpose of making her was to spend her life on earth in righteousness. This girl was to take birth in the southern part of India, to a couple (Ratnakar and his better half) who were highly devoted to these ‘Devis’. This girl was eventually born and from a very young age sought knowledge in high measure. Vaishnavi, as she was called, then introspected and used penance and mediation to increase her sphere of knowledge. Even as she immersed in meditation Lord Rama during exile learned of her and visited her. As soon as she recognized him, she asked him to allow her to merge into him.

At that time he could not allow that and many years after completing his exile, he went back to her but she could not recognize him so her wish remained unfulfilled. Lord Rama having predicted that her merger would take place in Kaliyug with the ‘Creator’ who would incarnate as ‘Kalki’, asked her to meditate at Trikuta base to become a blessing for all of mankind, redeeming them of their sufferings. Everything followed accordingly and her glory grew among men. 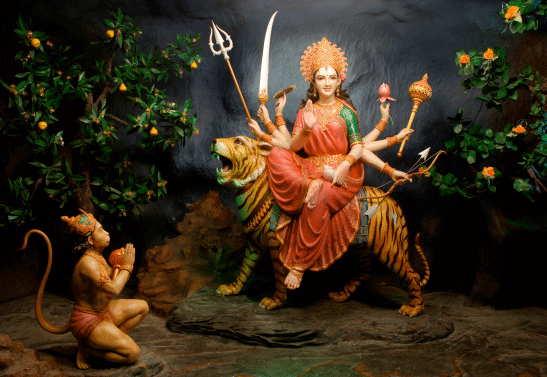 Soon Saint Goraknath wanted to know more about her interaction with Lord Rama and enquire if Vaishnavi had reached her peak of spirituality. His disciple, Bhairon Nath, was sent for this very purpose. However, Bhairon Nath instead grew fond of her beauty and decided to marry her. As soon as Vaishnavi learned of this thought of his, she ran away from her ashram to the mountains.

However, Bhairon Nath followed her into the mountains. Here, she stayed at (present-day) Charan Paduka, Adhkwari, and Banganga after which she entered the Holy Cave. She beheaded Bhairon Nath when he continued to follow her and only after his death did he realizes his mistake. As ‘Mata’ forgave Bhairon Nath, she also Left her form (human) and turned it into a rock for the purpose of meditation for eternity. Today, the rock which is a 5.5 ft tall form with three Pindies or heads is the center for worship by the Hindu deities.