Not many know that Gulmarg is the premier skiing resort. Skiing in India as a modern sport started almost at the same time as in Europe. The Ski Club of India was established in Gulmarg in 1927. The India Ski team won eight diplomas in the first-ever Asian Winter Sports held in March 1986, at Sapporo, Japan. Six of the winners are from Gulmarg the skiing paradise of India. Not all tourists who visit in winter come for skiing or to enjoy a holiday in the snow. Many of these are infected with the excitement of the skiers and have donned their first pair of skis within a short while of their arrival. It turns into a meadow of romance in winter, a small ski resort where everyone knows everyone else. The most enjoyable aspect of skiing in Gulmarg is the friendly atmosphere. 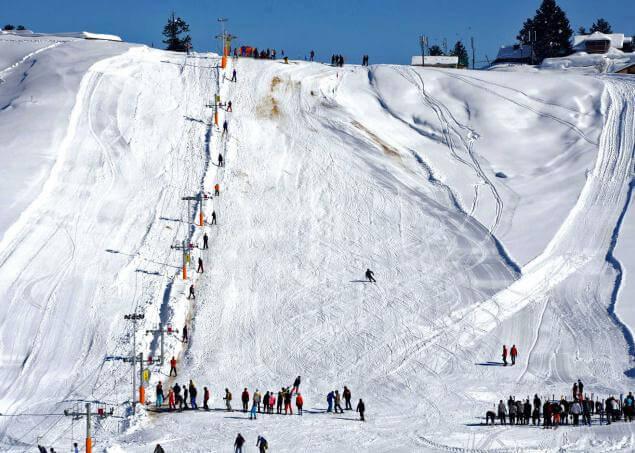 It is like one big family where everybody gets to know everyone else, adding to the fun and frolic. And because the slopes are so well-graded, skiers of the same level of competence keep together.

At an altitude of 2730 meters, Gulmarg slopes provide runs ranging from below 200 meters to 2000 meters and an altitude difference of over 1500 m. with lengths of more than 10 kms. Besides numerous ski slopes, graded for various levels of skiers, there is a chair lift of a length of 500 meters, providing a ski run of 700 meters. Among the multitudes of slopes, there are a few which are served by ski lifts. Most of the skiing becomes centered on these slopes, which are especially suited to beginners and intermediate-level skiers. For amateurs, there is a T-Bar giving a run of 700 meters. With the construction of the Poma Ski Gondola Cable car designed by Polamgalski of France, one of the highest and longest in the world; from Gulmarg all the way to Amherst, the destination offers ski runs for every level, including the most advanced.

Gulmarg is the only ski resort in the mighty Himalayas where you can ski with a magnificent view of the Karakorams. The rolling grassy backs over themselves with snow in winter, marking it the perfect ski resort in which to learn. To enter the spirit of fun and excitement that snow generates there are a host of snow sports to begin being the most popular. No skills are required – a flat wooden board is taken up the hill and is allowed to descend downhill. In addition, there are snow cycles, snow scooters, sledding, and snow bobbing which require no special training. 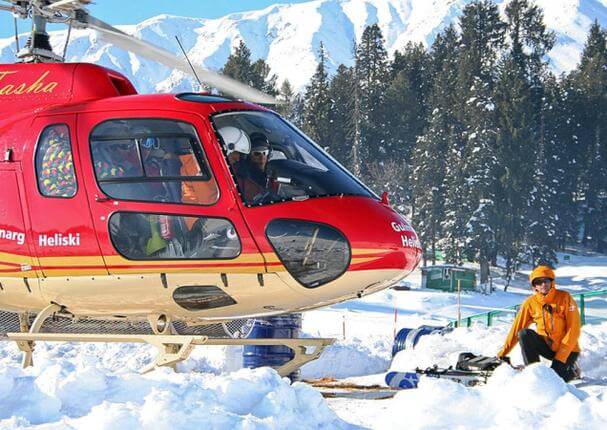 Gulmarg is the cheapest resort in the world to ski. A day’s cost including equipment hire, lifts, and instruction does not exceed more than $10-15. All ski equipment – skis, ski sticks, ski boots, ski poles, gloves, snow goggles, sleds, toboggans, skibobs, and ski jackets are available on hire from the ski shop, run by the Department of Tourism Govt. of India. Particularly of note is the high quality of the equipment, all of which is of international standard, imported from Austria and France. Instructors are available for beginners, besides, which the India Institute of Skiing and Mountaineering organizes 10 to 21-day short ski courses for beginners and advanced skiers. The all-inclusive courses cost $ 70 to $ 140 per person. The season is mid-December to mid-April and the road is kept open to Gulmarg throughout the winter with the help of a powerful German machine. To reach Gulmarg in the winter, the shortest way is only fifteen minutes by the J & K Tourism has 22 huts with one, two, or three bedrooms. They are mostly westernized. Insulted from the cold outside they are ideal to stay at in winter. Many of the privately run hotels remain open in winter as well – heating arrangements range from electric heaters to the very effective ‘Bukhari’ – a wood-fired stove in the center of each room.

Gulmarg has the distinction of being Asia’s only heli-skiing resort. It is the newest sport here while skiing is an old favorite. A helicopter takes the skiers up to the Apherwat peak from where they choose their own descent route. One can mark new tracks almost throughout the entire winter season. There are long chains of mountain Valleys and ridges covered with fine powder snow. One can even try a different valley each day with the aid of a helicopter. The high-cost factor entailed in this sport restricts it to the more affluent section of society. The helicopter is privately run, and those interested in booking up for `the package offered can contact the Tourist Reception Centre, Srinagar. Heli-Skiing was introduced by Sylvan Saudan in the Kashmir Himalayas in 1987.

PreviousFair & Festivals of LadakhNextHistorical Account of the Vaishno Devi Temple