A Splendid Tour to Leh, Ladakh

The eastern region of Jammu and Kashmir gives way to Leh, Ladakh’s capital city. Its location is on the historic crossroads of ‘Silk Route’ extending from the West Asia to Sinkiang flowing into the Indian plains. There is no shortage of tourist spots within the periphery of Leh including various monasteries and spectacular sights like the Alchi, Hemis, Lamayuru, Thikse and Shey monasteries and the famed Leh Palace. You also get the opportunity to participate in various adventure sports in this area like White Water Rafting, Trekking and Mountaineering.

Historical Check:
The history of Ladakh dates back to the time when it belonged to the ‘erstwhile Kingdom of Ladakh’, surviving as an ‘independent kingdom’ for almost 900 years from 10th century onwards. Post 1531, it was the Kashmiri Muslims that attacked the land periodically until Kashmir finally took it in the middle of 19th century. The earliest colonizers of the land were inclusive of the Indo-Aryan Monks from the Himalayan range, the Tibetan highlands based itinerant nomads and the Darads belonging to the extreme western end of the Himalayas. Today, the land flourishes with all these features and is inhabited by a mixture of people belonging to the above-mentioned clans, ushering in a cultural diversity in the land.

Day 1- Arriving at Leh:
As you reach the airport at Leh, you will be welcomed and taken to the destined hotel for a check-in. Take rest and get used to the altitude this first day. In the evening you can visit the Shanti Stupa and the Leh market for shopping. The night will be spent at the hotel.

Day 2- Leh Monasteries for Visit:
Having finished your breakfast, you will be given an Indus Valley Monastery tour which will include the famous Shey monastery. Thiksey, Ladakh’s ancient capital appears like a complex that involves tiers one on top of the other on the hill that rises above the Stok Palace village as well as Sindhu Ghat will all be part of the sightseeing experience. Lunch option can either be packed or you can eat from Stok. The night will be spent at the hotel. 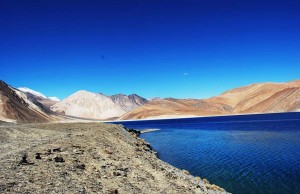 Day 3- Pangong Lake Excursion:
The next day, an early breakfast will be provided to you after which, you will set foot for the Pangong Lake via the Changla Pass which is 5486 metres in length. The Pangong Lake is 14,000 feet above the sea level. This inland drainage is a narrow long basin of 130 km is 6-7 km at its widest stretch with the international border of China and India bisecting it through and through. The government had opened this place for tourists in the recent past, keeping a thorough army surveillance. After absorbing the beauty of nature of this landscape you will be escorted back to the hotel to spend the night.

Day 4- Khardungla Top Visit:
On day 4, you will be driven to a height of 18,390 ft at Khardung la after breakfast completion. This place is the highest road for motor rides and starts at a 39 km distance from Leh. You will get an amazing view from this pass at the topmost part. Lunch will be served at the hotel. You can shop in the evening after rest and stay overnight at your hotel.

Day 5- Leaving Leh:
The tour ends on this day and you will be safely driven back to the airport for your flight back home.